Due to its introspection capabilities, the Cyberus virtualization platform is able to analyze Windows system calls. In this article we demonstrate how simple it is to extract system call parameters out of a running windows machine with Python using the Tycho API.

In order to access this feature via Python, we need the following prerequisites:

To analyze Windows system calls there are two possibilities:

The first method can easily be detected by malware samples, because breakpoints are visible manipulations in memory. Breaking on syscall instructions is not possible with usual debuggers, but the Cyberus virtualization platform provides such a mechanism.

Let's assume that the system call NtCreateFile is the most interesting one for our purposes when analyzing pafish.exe. We will show the Python Tycho API workflow by detecting this system call and carving out its arguments.

First, we open a python shell on the developer laptop and import some additional libraries to get system call breakpoints and system call analysis functionalities. In the next step we connect to Tycho service and open the pafish process.

To get the first occurrence of NtCreateFile, we have to pause pafish on startup and wait until it is scheduled the first time.

The break_on_start line tells Tycho to stop pafish.exe even before it executes its first instruction. In order to see when it "clicks in", we run a loop that sleeps until pafish.exe is scheduled for the first time and paused.

At this point, we are ready to launch the pafish.exe executable on our analysis box. pafish.exe does usually open a command line window on startup and prints its output. In our case, the window will not show up because Tycho interrupts it before it executes its first instruction. Lets look at the Windows Task Manager, to ensure that pafish.exe is already started: 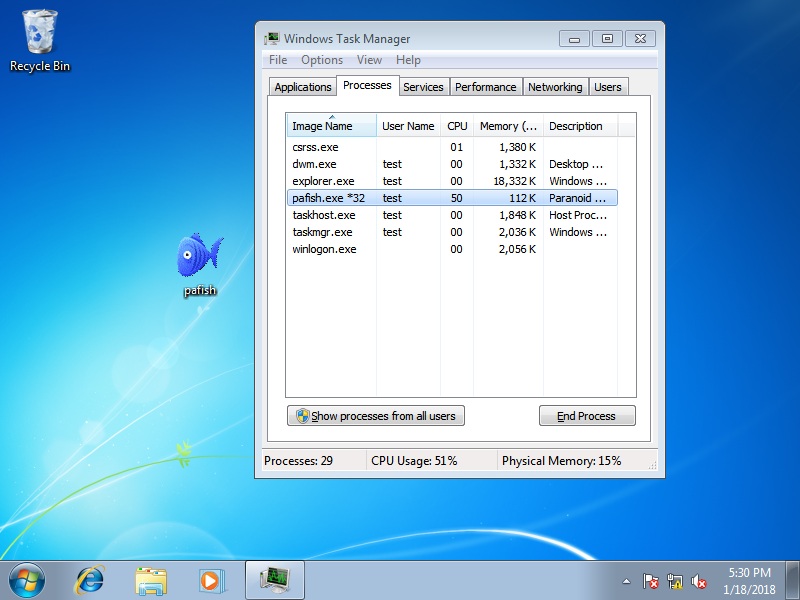 We can see that the pafish.exe process burns some CPU cycles without being visible. This is a side effect of our method to interrupt user threads without cooperation from the Windows kernel.

After returning from wait_for_breakpoint, we hold a handle object thread_handle that refers to the user thread of the pafish.exe process that tripped onto our system call breakpoint.

On the analysis box, we can see that the pafish console window popped up and printed some output already: 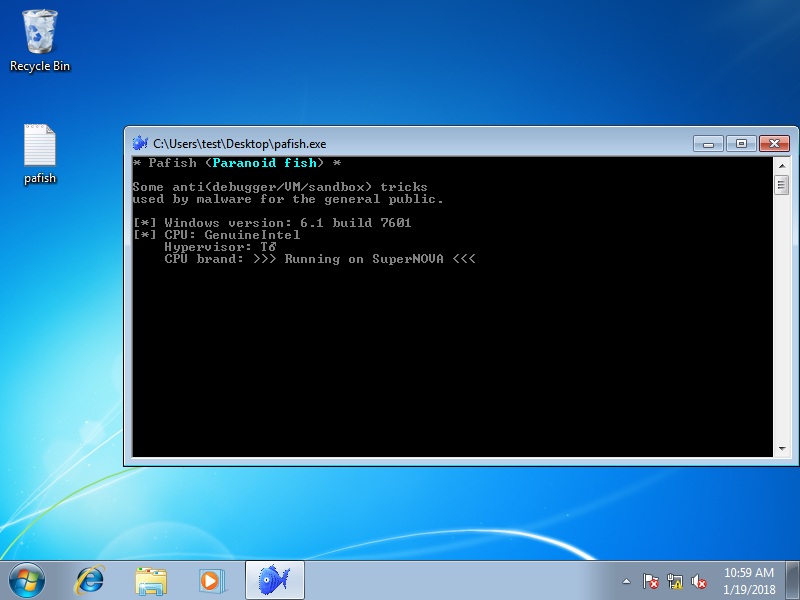 While we claim that the Cyberus virtualization platform is invisible to guest processes, the attentive reader might have seen that pafish prints the CPU brand string >>> Running on SuperNOVA <<<. This string comes from our internal test version of the virtualization platform binary and is not visible in the product binary, where only the original CPU brand string is visible.

Having a handle object to the interrupted thread, we can now analyze the system call's parameters. We can use the interpret_syscall function, which we have imported already, to carve out all parameters of this system call. This function uses the guest thread's register- and stack state to automatically access all relevant information.

When we call interpret_syscall, Tycho will access the relevant pieces of the thread's registers and stack memory, in order to provide us with a complete list of argument values:

Of course we get no return value as well as no output parameter values, because this system call has not been executed, yet.

In order to get these, we can use interpret_execute_syscall, which executes the system call and pauses the thread immediately after it returns from kernel space:

Have a look at the FileHandle parameter: NtCreateFile assumes the address of a pointer to a file handle, which it can then initialize with the handle value of the newly created file. Here we see that the address (value 582376) is dereferenced and the file handle value (value 172) is shown, too.

This is another built in feature of the Tycho Python API system call interpretation engine: If a parameter within a set of previously configured pointer types, it will automatically be inspected, too. We will give more information on that in upcoming blog posts.

As we can see, the Python Tycho API enables us to carve all parameters out of system calls with roughly 10 lines of Python code!

The system call interpretation feature of Tycho can do the following:

While for demonstration purposes we concentrated on the NtCreateFile system call, a complete set of low level system calls is available. It is also possible to add custom handlers to system call events that carve information more selectively.

Stay tuned for the next article, which will demonstrate how to list all files and devices that an application accesses during its life time.

Other nice ideas about what to do with Tycho system call interpretation:

Tycho can also be integrated with other tools. One prominent example is Cuckoo Sandbox, which can be combined with the Cyberus virtualization platform. The value of this combination lies in the indetectability, as Cuckoo can just use the Tycho system call interpretation feature instead of relying on a detectable user space agent or kernel space module. We will post more information on that in the future.