Reverse engineering a software is not an easy task. Especially not if you do this for the first time.

Hi, my name is Sebastian Manns. I study "general and digital forensics". Since one month I am a trainee at Cyberus Technology and my job is Software/Malware Analysis with Tycho.

In my first blog entry I will show you how easy it is to evaluate and manipulate system calls with Tycho using Pafish as an example.

In order to gain first experiences in software analysis with Tycho, I was looking for a simple project that would still be useful.

I chose Pafish, because it is a small tool similar to malware that performs various tests to detect if it is running in a virtual environment. When malware detects virtualization, it may not do what it is supposed to do, but behaves inconspicuously. That's why it's important that analysis tools like Tycho are as invisible as possible.

By comparing the two screenshots below, you can see the difference between pafish's output on a normal Oracle Virtualbox VM and on my Tycho Setup. Currently Tycho is not completely invisible for Pafish: 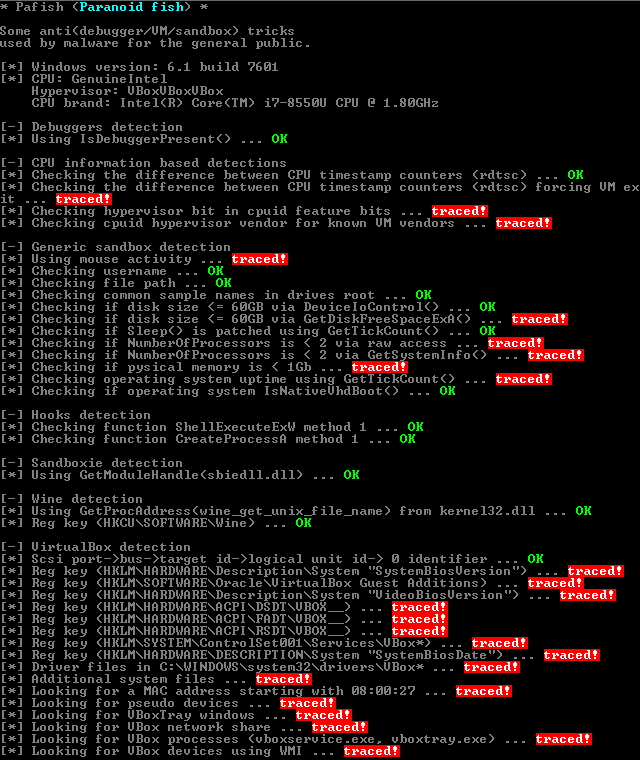 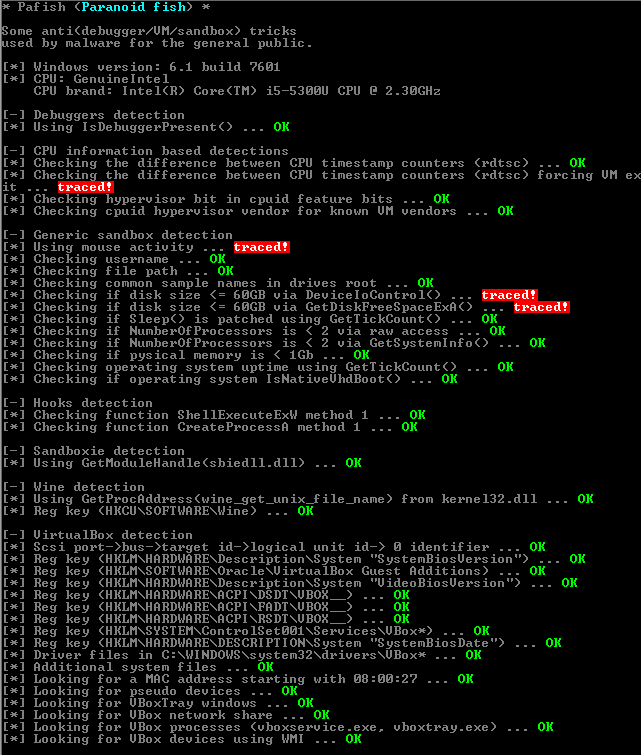 What about the tests that failed? There are four tests that trace the Tycho VM:

Trace number 1 comes from pafish taking the difference between two CPU timestamp counter values. Between those two values, it forces a VMEXIT event of the VM it is potentially running in. Faking timestamp counters is a possibility, but this shall not be the scope of this article.

Trace number 2 comes from the fact that the mouse remains untouched on the analysis system.

I found traces number 3 and 4 most interesting, because they use two specific system calls to test if the hard disk's size is unusually small. My analysis hardware really has such a small disk, so i would need to patch this anyway if i did not get a larger one.

The idea is now to use Tycho to fake the disk size and delude pafish that it is much larger. This task is very manageable, and it is easy to get familiar with different functions of Tycho. And at the end, the Tycho Setup passes two more tests and a nice example script for Tycho is still finished.

What exactly are system calls and why are they important for software analysis?

System Calls are used to call a kernel service from user land. The goal is to be able to switch from user mode to kernel mode, with the associated privileges. What system calls are available depend on your operating system.

Tycho gives us full control over the communication from a program to the operating system. We can stop the program at any system call, evaluate and manipulate it and let the program run again. And all this without even looking at a traditional debugger and dealing with assembler code.

For this task we only need an typical Tycho Setup and Pafish.

This test checks if the hard disk is less than 60 GiB, because a normal computer rarely has such a small hard disk. To do this, Pafish uses the Windows function DeviceIoControl. To be able to work with Tycho we have to go deeper and use the system call that is called by the DeviceIoControl function, which is NtDeviceIoControlFile.

Now let's have a look at the system call. All we need to do is to pause Pafish when this system call occurs. How to pause a program with breakpoints on a system call is also described in the previous article Windows system call parameter analysis.

So now we begin to find the system call.

First we import the most important libraries, which are needed for the breakpoints and the evaluation of the system calls. Then we connect to the Tycho server and with service.open_process("pafish.exe") we open a handle to the process. After that, we wait until pafish.exe is started. The pafish.pause() call will make sure that the process is stopped as soon as it is started.

This piece of code creates a breakpoint for NtDeviceIoControlFile via our pafish-tycho-process, activates it and waits for the breakpoint.

In this snippet of code we create a factory object which retrieves the input and output parameters of a system call. And finally, we're waiting for Pafish to use it.

With the new information we acquired about the system call, the next task is to find out where the size of the hard disk is, and how we can change it.

Looking at NtDeviceIoControlFile in the MSDN docs again, we find the following information:

The structure that this pointer points to is 8 bytes in size, consisting of a single member indicating the disk size.

Now that we have the right system call and know what it does, it is super easy to manipulate it with Tycho. To check the output from above, you can do the following steps.

And with just one more command it is possible with Tycho to change the size to 500 GiB.

The second test is similar to the first. This time it checks how much space is available on the C: partition. If less than 60GiB are free the test is not passed. To check this, the function getDiskFreeSpaceExA is used. This function calls the system call NtQueryVolumeInformationFile which we can analyze with Tycho.

We add NtQueryVolumeInformationFile to the whitelist and the system call interpretation retrieves the following information after the breakpoint was hit:

With Tycho, we can easily read the raw bytes from this object.

But the 0x18 bytes of output aren't really easy to understand yet, because the FileFsSizeInformation is a structure like this:

Let's read the individual parts of it step by step with struct.unpack().

You get the result 6.3148 GiB. That exactly describes the free space on the C: partition.

Here it is also super easy to change the return value with Tycho. As an example we want to manipulate the system call so that the partition is 300 GiB and still has 150 GiB free space. For this we have to change the total clusters and the free clusters. We need to know how many clusters we need for these values. For this we use the following calculation:

Using this change, we let the partition to be 300 GiB in size, with 150 GiB of free space, and Pafish reports success.

Tycho is a cool tool for software analysis. In this blog entry I showed you how easy it is to find, stop, analyze and manipulate system calls with tycho.

Because you can easily get complete information from a system call before and after execution, you can quickly find out a lot about the software. And all this without using a classic debugger.

With Tycho's Python API it is also super easy to script analysis tasks and to integrate it into other tools. Furthermore Tycho exposes much less virtualization artifacts than other off-the-shelf virtualization software, which is a big advantage in malware analysis.