Defeating the Packing of Malware Using Execute After Write

In this article, I will show how easy and fast it is to dump the payload of a packed malware using a simple pyTycho python script. This explanation is based on the semantic breakpoints feature of Tycho and its open-source library pyTycho. If you are not familiar with Tycho, you can have a look at the previous blog posts.

Packers, crypters, and protectors are tools that can be used to obfuscate malware by packing, compressing or encrypting its binary; to make it harder and tedious to analyze by the malware analyst using static analysis.

During the packing process, the malicious code of the malware is compressed and stored in the packed section of the new packed executable. Crypters do the same while the packed section is encrypted, and later on, it is decrypted at runtime. Protectors are a combination of packers and crypters with additional functionalities such as code virtualization and anti-analysis techniques.

The picture below shows some of the existing tools that include packers, crypters, and protectors altogether. However, not all of the tools you find in this image have been meant for obfuscating malware; some of them initially existed for benign use. 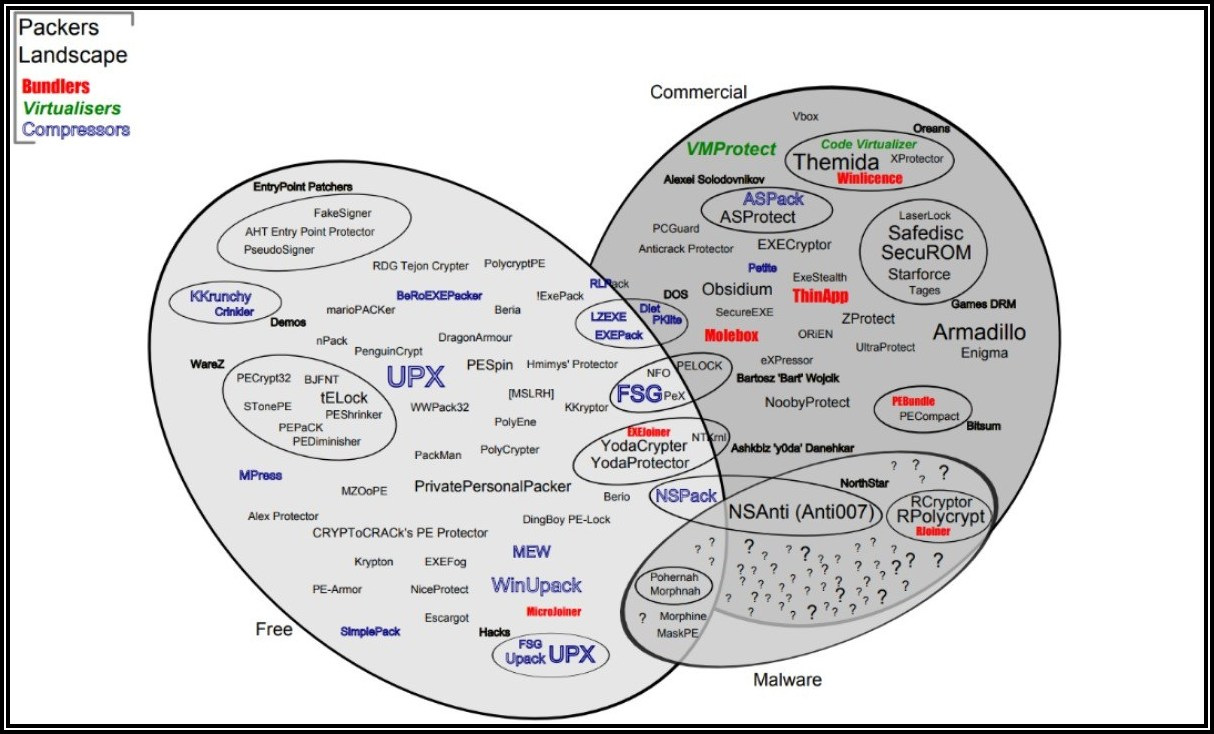 This image was designed by Ange Albertini https://corkami.blogspot.com

The Impact of Packing on Static Malware Analysis

Static malware analysis is usually performed by dissecting the different sections of a binary file without executing it. In these sections, the malware analyst can find important information such as the entry point and the import address table (IAT) of that binary.

The entry point of a binary is a worthwhile piece of information to the analyst as it is typically used to follow the correct flow of the binary after disassembling it using disassembler tools such as IDA.

The IAT is a table of pointers to external functions the binary uses. By inspecting the names of the functions in this table, the malware analyst will know what this malware is supposed to do. If there are, for example, functions related to any network socket functions in the IAT, this is most likely a good indication for communication between this malware and other computers on the local network or on the Internet. Malware that gets commands from a command and control C&C server is a good example.

Due to packing, these different pieces of information are obfuscated, which in turn makes the static analysis process tedious and arduous.

For all known packers, many tools exist that are able to unpack the payload which was previously packed. Sometimes the packing and the unpacking features even exist in the same packing tool.

For example, if the well-known UPX packer was used to pack a binary, the malware analyst can easily identify this type of packing simply by using *nix file command or any GUI tool such as exeinfo or PEStudio (the latter are Windows tools).

Consequently, the malware analyst can use the proper unpacking tool. In this case this would be the UPX unpacker feature, and easily unpack the malware.

Nevertheless, these days, malware authors use custom obfuscation techniques that will evade detection by signature-based tools. Malware authors can simply test their malware against existing detection tools to make sure that their product won't be easily identified by the malware analyst. In this case, the malware analyst still won't know which packer was used. As a result, the deobfuscation process potentially becomes time-consuming and frustrating.

A potential solution is manual intervention such as the one demonstrated in this blog article or giving up static analysis and instead focusing on dynamic analysis. However, modern malware can exhibit a wide variety of deceptive techniques to also defeat dynamic analysis. This includes delaying of the execution of malicious payloads, testing for virtual environments or active debuggers, or requiring some sequence of interactive user input. For such reasons, static analysis remains an attractive method for malware analysis.

What can Tycho do?

Instead of tedious low-level work, an analyst usually has to do to dump the malicious payload from a packed malware, Tycho provides a very easy to use python API called pyTycho. pyTycho which is shipped with Tycho. In this article, we use it to write a high-level and simple python script to dump the binary including the malicious payload. I will show below how that is possible.

The typical behavior of packed malware is generally as follows: A self-extracting malware app first unpacks and then writes the malicious payload to memory. After unpacking, it executes the payload. From a high-level perspective this behavior is common to all packers and crypters. We call this behavior execute-after-write.

Luckily, the pyTycho API gives analysts access to structures in our Tycho hypervisor that allow for triggering events on e.g. specific system calls (with filters on their parameters), memory read/write/execute events (invisible to the guest system), and much more. Therefore, we can easily build an execute-after-write event detection mechanism by manipulating the page tables to trigger write and execute events, as described in the following.

At this point, we can detect where unpacked memory has been written to. We do not know yet, if it finished unpacking the whole payload. In order to detect that, we remove the execute permission from all pages we receive a write event from. This way, we will receive another event whenever the malware tries to execute instructions from pages that it has previously been writing to. Receiving a series of write events with one following execute event within the range of the pages that have been written to, lets us conclude that the payload is unpacked.

The code snippet below shows how this mechanism can easily be implemented.

This code is part of the not yet released bachelor thesis of Sebastian Manns.

At this point, we can remotely kill the process using Tycho to make sure that the payload of the malware is not going to be executed.

I prepared a demo screencast which shows how to quickly dump the payload of a packed malware sample. The following tools are used in the demo:

In the demo, the screen is divided into two main windows:

The target machine is connected to the analyst machine in the same way we previously explained in this article.

We previously packed the pafish.exe executable and uploaded it to the target machine's desktop. Its filename is pafish-upx.exe.

: The python script is armed to wait for the execution of our malware sample.

: pafish-upx.exe is executed. You will notice that the python script on the analyst terminal detects its execution.

: The execute-after-write behavior is detected. Our script prints its >>> EXECUTE AFTER WRITE DETECTED <<< message and dumps the unpacked payload to the analyst's file system.

: The VMdetect YARA rules are run on the packed executable.

: The VMdetect YARA rules are run on the unpacked executable dump. In this case, 28 different rules trigger!

You will find that we kept the malware running although we advertised that it is possible to stop it right before it executes its payload. In order to show that this technique is not disrupting the normal execution of the malware, we decided to continue its execution in the demo. pyTycho provides simple methods to kill any process on demand.

In this article, I have shown how easy, simple, and time-efficient the malware unpacking process can be when using Tycho. We successfully simplify payload extraction that by what we call execute-after-write behavior detection, which is the typical behavior of packers and crypters.

The approach we've used in this article doesn't work with malware that does multistage unpacking that doesn't completely unpack the malicious payload at once before it starts executing the payload. However, we can extend the mentioned technique to work with this type of packing by e.g. postponing the dumping process until the malware is completely unpacked.

If you have any questions, please, don't hesitate to contact us.